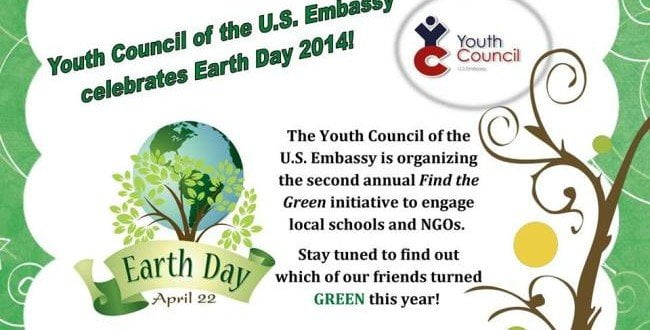 Find the Green initiative was among the first projects of the Youth Council of the U.S. Embassy in Macedonia by engaging several municipalities and numerous schools across the country to contribute for a cleaner and healthier environment. This year to continue the tradition, the Youth Council for the second time undertook a cleanup eco action in celebration of Earth Day April, 22nd for raising the awareness among the youth as carriers of future. In a world struggling with global warming and the spite, we believe that encouraging and engaging youth to become aware and take action regarding environmental issues is crucial in forming good habits as well as preservation of the environment and the Earth. In our initiative this year we included local actors such as: elementary schools, high schools, organizations and the like to begin a cleanup action and set a good example for the community starting from the immediate surroundings as school yards and the neighborhood by picking up scattered trash and throwing it in the designated containers.

On the photos below you can see who got involved in our grassroots cleanup action. We would like to thank each and every of them for being part of the Find the Green 2014.

The Youth Council brings together youth from different disciplines, interests, ethnicities and religious backgrounds. Established by the U.S. Embassy in Skopje, it seeks to generate creative ideas and projects to empower the youth of Macedonia, and to strengthen the voice of youth by advising the Embassy on important youth issues.
@ycusmac
Previous CALL FOR APPLICATIONS- JOIN OUR TEAM!
Next YOUTH COUNCIL- OPEN CALL FOR APPLICATIONS 2015