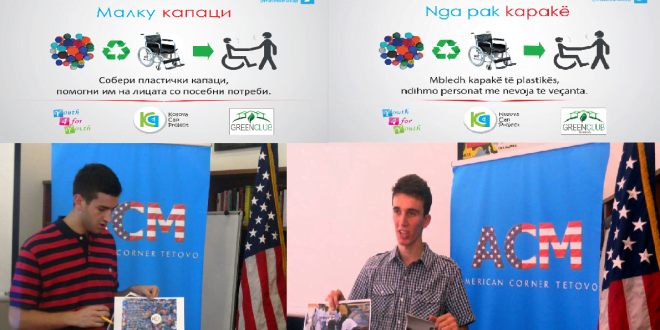 Youth Council of the U.S Embassy in North Macedonia May 21, 2013 News Leave a comment 537 Views

Recycling, humanity and help for the people with special needs enables the “Macedonia Cap project” which was presented at the American Corner Tetovo by Gezim Qahili and Vesel Qazimi.They undertook the mission to raise the awareness of the citizens in collecting plastic caps with which in the end they manage to get wheelchairs for the people that cannot walk on their own. Until now, they have received two wheelchairs and donated them to two Tetovo children, bringing their hopes back and enabling them to move with the help of the wheelchair. Their idea started to expand in other cities of Macedonia, asking of people to collect the plastic caps, and thus with 250 kg of caps they can provide a wheelchair. While presenting the project, the speakers told that until now they have established 40 active collecting points for the plastic caps, and they also said that they were encouraged with children’s readiness in collecting the plastic caps to provide more wheelchairs for the people with special needs.

The Youth Council brings together youth from different disciplines, interests, ethnicities and religious backgrounds. Established by the U.S. Embassy in Skopje, it seeks to generate creative ideas and projects to empower the youth of Macedonia, and to strengthen the voice of youth by advising the Embassy on important youth issues.
@ycusmac
Previous The 7th Ministerial Meeting of the Community of Democracies in Ulaanbaatar, 27-29 April, 2013
Next 1st anniversary!