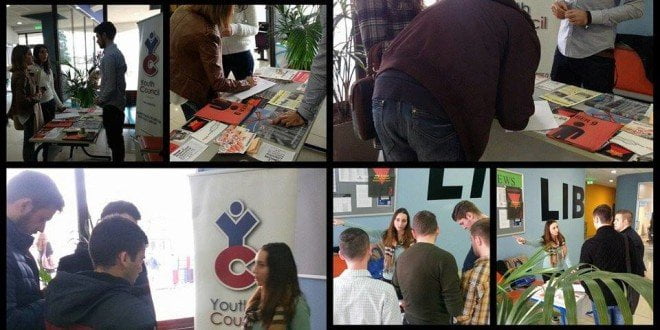 Flyers, posters, cards, stickers and booklets were handed out to students with strong messages to overcome violence against women, nationalism, fascism as well as online hate.

From 12:00 p.m.-1 p.m. more than 50 students visited the booth to learn more about this day and shared their experience with hate. They expressed current pressures in combating violence against women and explained that more laws should be passed rather than implementing the laws that are currently in place.

The Entity for Gender Equality and the Empowerment of Women, and their work around the world is extensive.  They have made today, November 25th, International Day for the Elimination of Violence Against Women.

The Youth Council brings together youth from different disciplines, interests, ethnicities and religious backgrounds. Established by the U.S. Embassy in Skopje, it seeks to generate creative ideas and projects to empower the youth of Macedonia, and to strengthen the voice of youth by advising the Embassy on important youth issues.
@ycusmac
Previous The Youth Council Presents: Hopscotch!
Next World AIDS Days