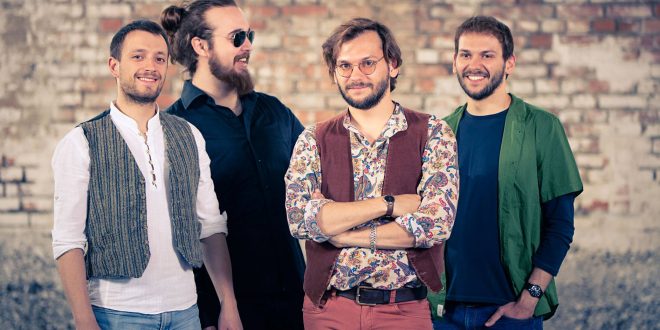 On the youth fest on Sunday 7th in MKC we have included Minstrel gallery on the agenda to give you the opportunity to listen to an original new type of music this society really needs.

Minstrel’s Gallery is a musical group from North Macedonia, formed in March 2013. Their music is an eclectic combination of a wide variety of genres, making it quite hard to define. Among those musical styles are Heavy Rock, Jazz/Fusion, Psychedelia, World Folk Music, Avant-garde influences which blended together with the uncommon time signatures and composing techniques, they briefly call it Progressive/Art Rock.

All of them were born around 1992/93 and live in Skopje, except for Dame, who is based in Kumanovo, where the band also records in his home studio, making the Bass player a producer of the band’s music as well. All of the songs are the band’s original compositions and poems, written mainly by Viktor, but with a lot of contributions, ideas, and songs by all the other band members. In addition to composing and playing music, Minstrel’s Gallery is a visual arts group as well, painting and drawing pictures for each song, which they exhibit on album promotions and in the booklet of their CDs.

The first album of Minstrel’s Gallery, entitled “Ignorance leads to Ruin”, was released in February 2016. Since the formation, the band has played many concerts in and out of Macedonia, including a few in Germany and Spain. Their second album came out in spring 2017. They are currently tackling the music stage in Skopje and possibly the rest of the country and bringing a diverse perspective on the scene.

The Youth Council brings together youth from different disciplines, interests, ethnicities and religious backgrounds. Established by the U.S. Embassy in Skopje, it seeks to generate creative ideas and projects to empower the youth of Macedonia, and to strengthen the voice of youth by advising the Embassy on important youth issues.
@ycusmac
Previous CALL FOR NOMINATIONS (CfN) # CEP-YCEA-03 YOUTH CIVIC ENGAGEMENT AWARD
Next DJ Ux (Oubli) – Making diversity cool through underground music